According to the Vedic principles, there are three stages of spiritual advancement, namely, sambandha-jñāna, abhidheya and prayojana. Sambandha-jñāna refers to establishing one’s original relationship with the Supreme Personality of Godhead, abhidheya refers to acting according to that constitutional relationship, and prayojana is the ultimate goal of life, which is to develop love of Godhead (premā pum-artho mahān). If one adheres to the regulative principles under the order of the spiritual master, he very easily achieves the ultimate goal of his life. A person who is addicted to the chanting of the Hare Kṛṣṇa mantra very easily gets the opportunity to serve the Supreme Personality of Godhead directly. ( CC Adi 7.73P)

“Sri Govindaji acts exactly like the siksa-guru. He is the original preceptor, for Govindaji gives us instructions and an opportunity to serve Him. The diksa-guru is a personal manifestation of the Sri Madana-mohana vigraha. Both of these Deities are worshiped at Vrindavana. Srila Gopinatha is the ultimate attraction of spiritual realization.” (CC Adi 1.47p.) 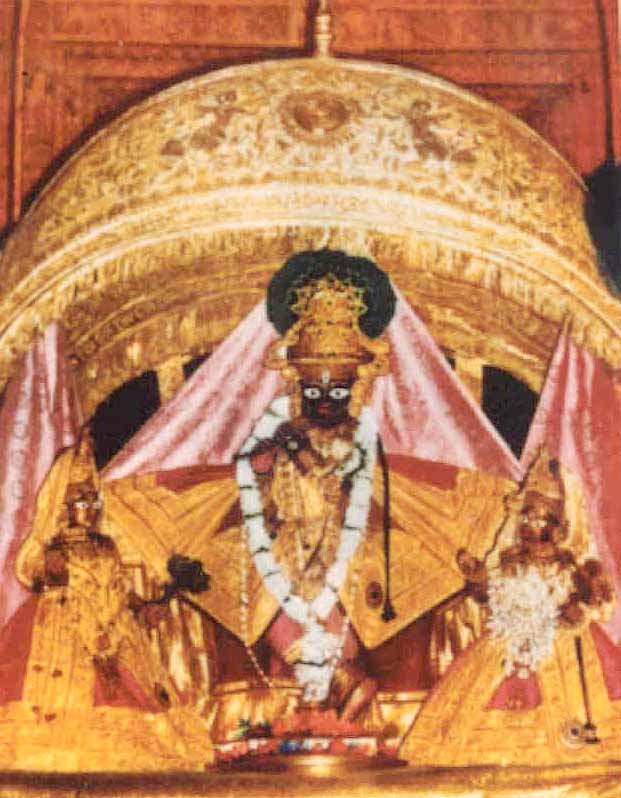 Srila Sanatana Goswami is the acharya of sambandha, the process of understanding our relationship with Lord Krishna.  The deity for Sambandha is Madan Mohan.

By receiving the mercy of the Radha-Madana-mohana Deity, and by studying the writings of the sambandha-acharya Srila Sana­tana Gosvami, a devotee will attain sambandha-jnana, or knowledge of one’s spiritual identity and his eternal relationship with Sri Krishna. Srila Prabhupada states, “Madana-mohana, Sanatana Gosvami’s Deity, helps us progress in Krishna consciousness. In the execution of Krishna consciousness, our first business is to know Krishna and our relationship with Him, which we can learn by worshiping the Madana-mohana vigraha.”

Srila Rupa Goswami is the acahrya of abhidheya and he reveals how to execute devotional service. His Deity of Radha-Govindaji accepts service and gives inspiration for increasing surrender on the path of bhakti-yoga. By writing many books Srila Rupa Gosvami has very kindly established the scientific basis of bhakti. “Everyone should read this book, Nectar of Devotion, very attentively, because all the conclusive statements about the Kingdom of Bhakti are contained in this transcendentally valuable book. It is the essence of all Vedic scriptures enlightening about Krishna consciousness. If anyone reads this Nectar of Devotion very carefully, he will have all guidance in the Bhakti Cult.” (Srila Prabhupada lecture 6/27/70)

Sri Raghunatha Dasa Goswami is our prayojana acharya. The Gopinatha Deity is Krishna as master and proprietor of the gopis, the totally surrendered devotees . The Gopinatha Deity represents the prayojana-tattva (truth about life’s ultimate goal”pure love of Krishna. Srila Raghu­natha dasa Gosvami accepts the lotus feet of Srila Rupa Gosvami as his highest aspiration. He thus reveals the way to attain the perfection of one’s loving relationship with Sri Krishna. Through humble prayers and service to the Radha-Gopinatha Deity, and by imbibing the teachings and mercy of Srila Raghunatha dasa Gosvami, a devotee can quickly advance in devotional service and ultimately attain the goal of life, prema-bhakti. (MNS)

“The Gaudiya Vaisnavas who follow strictly in the line of Sri Caitanya Mahaprabhu worship the Divinity by chanting transcendental sounds meant to develop a sense of one’s transcendental relationship with the Supreme Lord (sambandha), and reciprocation of mellows of mutual affection (abhidheya), and ultimately, the achievement of the desired success in loving service (prayo­ja­na). These three Deities (Madana-mohana, Govindaji, Gopinatha) are worshiped in three different stages of one’s development. The followers of Sri Caitanya Mahaprabhu scrupulously follow these principles of approach.” (CC Adi 1.19p.)

In a seminar on bhakti culture HG Srimati Mataji shared three most beautiful verses to describe our relationship with Lord at above three stages, they are most practical for an aspiring devotee. We can recite these verses daily, also before our japa and even during the middle of our japa when the attentiveness seems to slip away. I am trying, and struggling, to follow the same but still reaping some benefits inspite of all my handicaps.

O Mahäprabhu, please be merciful to me so that the ten offenses never touch my heart, and I can always remain absorbed in the rasa of the Holy Name. (Harinäma Chintamani 13.59 Bhaktivinoda Thäkura)

“Without love of Godhead, My life is useless. Therefore I pray that You accept Me as Your servant and give Me the salary of ecstatic love of God.” (cc Adi .20.37)

As I write this blog, a verse which Krishnadāsa Kavirāja Gosvāmī, author of Caitanya-caritāmṛta, wrote, comes to my memory

I offer my respects to the Supreme Personality of Godhead, Śrī Caitanya Mahāprabhu, by whose desire I have become like a dancing dog and suddenly taken to the writing of Śrī Caitanya-caritāmṛta, although I am a fool. (cc Adi 8.1)

I humbly seek forgiveness for any mistakes in compiling on this topic.

Q: What is the process to achieve the ultimate goal of life-love of God ? Please explain each step in this process.

Ans : Śrī Caitanya Mahāprabhu describes the symptoms of emotion and love and the awakening of one’s original loving relationship with the Lord, as well as the characteristics of a devotee who has actually attained that stage, in Madhya Lila chapter 23.

CC Madhya 23.9: “If, by good fortune, a living entity develops faith in Kṛṣṇa, he begins to associate with devotees.

CC Madhya 23.10: “When one is encouraged in devotional service by the association of devotees, one becomes free from all unwanted contamination by following the regulative principles and chanting and hearing.

CC Madhya 23.11: “When one is freed from all unwanted contamination, he advances with firm faith. When firm faith in devotional service awakens, a taste for hearing and chanting also awakens.

CC Madhya 23.12: “After taste is awakened, a deep attachment arises, and from that attachment the seed of love for Kṛṣṇa grows in the heart.

CC Madhya 23.13: “When that ecstatic emotional stage intensifies, it is called love of Godhead. Such love is life’s ultimate goal and the reservoir of all pleasure.

Srila Prabhupada quotes Śrīla Bhaktivinoda Ṭhākura, who summarizes this growth of love of Godhead as a gradual process.

Thus devotional life is divided into two stages — sādhana-bhakti and bhāva-bhakti. Sādhana-bhakti refers to the development of devotional service through the regulative principles. The basic principle for the execution of devotional service is faith. Above that, there is association with devotees, and after that there is initiation by a bona fide spiritual master. After initiation, when one follows the regulative principles of devotional service, one becomes freed from all unwanted things. In this way one becomes firmly fixed and gradually develops a taste for devotional service. The more the taste grows, the more one desires to render service to the Lord. In this way one becomes attached to a particular mellow in the Lord’s service — śānta, dāsya, sakhya, vātsalya or madhura. As a result of such attachment, bhāva develops. Bhāva-bhakti is the platform of purified goodness. By such purified goodness, one’s heart melts in devotional service. Bhāva-bhakti is the first seed of love of Godhead. This emotional stage is there before one attains pure love. When that emotional stage intensifies, it is called prema-bhakti, or transcendental love of Godhead. This gradual process is also described in the following two verses, which are found in the Bhakti-rasāmṛta-sindhu (1.4.15-16).

CC Madhya 23.14-15: “‘In the beginning there must be faith. Then one becomes interested in associating with pure devotees. Thereafter one is initiated by the spiritual master and executes the regulative principles under his orders. Thus one is freed from all unwanted habits and becomes firmly fixed in devotional service. Thereafter, one develops taste and attachment. This is the way of sādhana-bhakti, the execution of devotional service according to the regulative principles. Gradually emotions intensify, and finally there is an awakening of love. This is the gradual development of love of Godhead for the devotee interested in Kṛṣṇa consciousness.’

Q: What are the nine symptoms which manifest in one’s behaviour when the seed of ecstatic emotion for Krishna fructifies ?

CC Madhya 23.18-19: “‘When the seed of ecstatic emotion for Kṛṣṇa fructifies, the following nine symptoms manifest in one’s behavior: forgiveness, concern that time should not be wasted, detachment, absence of false prestige, hope, eagerness, a taste for chanting the holy name of the Lord, attachment to descriptions of the transcendental qualities of the Lord, and affection for those places where the Lord resides — that is, a temple or a holy place like Vṛndāvana. These are all called anubhāva, subordinate signs of ecstatic emotion. They are visible in a person in whose heart the seed of love of God has begun to fructify.’

Love of God is transcendental to liberation [mukti], and thus it is called the fifth stage of spiritual realization, above the stage of liberation. (Srimad Bhagavatam Introduction)