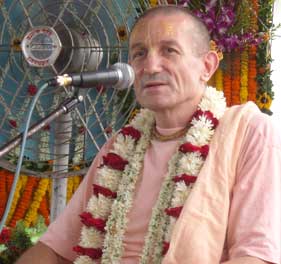 I randomly opened Śrī Caitanya-caritāmṛta yesterday and this beautiful verse, with an enlightening purport by Srila Prabhupada, opened up.

Q : What is the meaning of word Prabhupada ?
Answer:

Translation:
When Kāśī Miśra heard the proposal, he said, “I am very fortunate that Śrī Caitanya Mahāprabhu, the Lord of all prabhus, will stay at my home.”

Srila Prabhupada writes in his purport ‘In this verse the word prabhupāda, referring to Śrī Caitanya Mahāprabhu, is significant. Regarding this, Śrīla Bhaktisiddhānta Sarasvatī Gosvāmī Prabhupāda comments, “Śrī Caitanya Mahāprabhu is the Supreme Personality of Godhead Himself, Śrī Kṛṣṇa, and all His servants address Him as Prabhupāda. This means that there are many prabhus taking shelter under His lotus feet.”

The pure Vaiṣṇava is addressed as prabhu, and this address is an etiquette observed between Vaiṣṇavas. When many prabhus remain under the shelter of the lotus feet of another prabhu, the address Prabhupāda is given.

The ācārya, the spiritual master, is generally respected by others as Śrīpāda, and the initiated Vaiṣṇavas are addressed as Prabhu. Prabhu, Prabhupāda and Viṣṇupāda are described in revealed scriptures like Śrīmad-Bhāgavatam, Caitanya-caritāmṛta and Caitanya-bhāgavata. In this regard, these scriptures present evidence accepted by unalloyed devotees.’