( A murti of Srila Prabhupada at his birthplace in Tollygunge)

This the the second in the series of three part glorification of Srila Prabhupada’s qualities and the events leading to his departure to USA.

Teacher: Srila Prabhupada was not just a teacher, but also a teacher of teachers for the modern age. He translated more than 70 Vedic books into English and was honoured by many leading scholars. He taught and led by example, embodying the knowledge that he conveyed. He is recognised as ‘Prabhupada’ – one at whose feet the other masters sit.

Compassion: Srila Prabhupada had selfless concern for the welfare of all living beings. He wanted to relieve our suffering, but explained that compassion for the material body alone does not provide a lasting solution. He saw suffering as a symptom of a deeper problem: our misidentification with the temporary material body. He enlightened us about our real identity: the soul.

We continue our reading from the 11th chapter

Sumati Morarji was concerned. “Swamiji, you are so old-you are taking this responsibility. Do you think it is all right?”

“No,” he reassured her, lifting his hand as if to reassure a doubting daughter, “it is all right.”

“But do you know what my secretaries think? They say, ‘Swamiji is going to die there.'”

Bhaktivedanta made a face as if to dismiss a foolish rumor. Again he insisted that she give him a ticket. “All right,” she said. “Get your P-form, and I will make an arrangement to send you by our ship.” Bhaktivedanta Swami smiled brilliantly and happily left her offices, past her amazed and skeptical clerks.

A “P-form”-another necessity for an Indian national who wants to leave the country-is a certificate given by the State Bank of India, certifying that the person has no excessive debts in India and is cleared by the banks. That would take a while to obtain. And he also did not yet have a U.S. visa. He needed to pursue these government permissions in Bombay, but he had no place to stay. So Mrs. Morarji agreed to let him reside at the Scindia Colony, a compound of apartments for employees of the Scindia Company.

He stayed in a small, unfurnished apartment with only his trunk and typewriter. The resident Scindia employees all knew that Mrs. Morarji was sending him to the West, and some of them became interested in his cause. They were impressed, for although he was so old, he was going abroad to preach. He was a special sādhu, a scholar. They heard from him how he was taking hundreds of copies of his books with him, but no money. He became a celebrity at the Scindia Colony. Various families brought him rice, sabjī, and fruit. They brought so much that he could not eat it all, and he mentioned this to Mr. Choksi. Just accept it and distribute it, Mr. Choksi advised. Bhaktivedanta Swami then began giving remnants of his food to the children. Some of the older residents gathered to hear him as he read and spoke from Śrīmad-Bhāgavatam. Mr. Vasavada, the chief cashier of Scindia, was particularly impressed and came regularly to learn from the sādhu. Mr. Vasavada obtained copies of Bhaktivedanta Swami’s books and read them in his home.

Mrs. Nagarajan: Every time when I passed that way, he used to be writing or chanting. I would ask him, “Swamiji, what are you writing?” He used to sit near the window and one after another was translating the Sanskrit. He gave me two books and said, “Child, if you read this book, you will understand.” We would have discourses in the house, and four or five Gujarati ladies used to come. At one of these discourses he told one lady that those who wear their hair parted on the side-that is not a good idea. Every Indian lady should have her hair parted in the center. They were very fond of listening and very keen to hear his discourse.

Every day he would go out trying to get his visa and P-form as quickly as possible, selling his books, and seeking contacts and supporters for his future Śrīmad-Bhāgavatam publishing. Mr. Nagarajan tried to help. Using the telephone directory, he made a list of wealthy business and professional men who were Vaiṣṇavas and might be inclined to assist. Bhaktivedanta Swami’s neighbors at Scindia Colony observed him coming home dead tired in the evening. He would sit quietly, perhaps feeling morose, some neighbors thought, but after a while he would sit up, rejuvenated, and start writing.

Sometimes I would go by, and his cādar would be on the chair, but he would be sitting on the windowsill. I would ask him, “Swamiji, did you have any good contacts?” He would say, “Not much today. I didn’t get much, and it is depressing. Tomorrow Kṛṣṇa will give me more details.” And he would sit there quietly.

After ten minutes, he would sit in his chair and start writing. I would wonder how Swamiji was so tired in one minute and in another minuteñ Even if he was tired, he was not defeated. He would never speak discouragement. And we would always encourage him and say, “If today you don’t get it, tomorrow you will definitely meet some people, and they will encourage you.” And my friends used to come in the morning and in the evening for discourse, and they would give namaskāra and fruits.

Mr. Nagarajan: His temperament was very adjustable and homely. Our friends would offer a few rupees. He would say, “All right. It will help.” He used to walk from our colony to Andheri station. It is two kilometers, and he used to go there without taking a bus, because he had no money.

Bhaktivedanta Swami had a page printed entitled “My Mission,” and he would show it to influential men in his attempts to get further financing for Śrīmad-Bhāgavatam. The printed statement proposed that God consciousness was the only remedy for the evils of modern materialistic society. Despite scientific advancement and material comforts, there was no peace in the world; therefore, Bhagavad-gītā and Śrīmad-Bhāgavatam, the glory of India, must be spread all over the world.

Mrs. Morarji asked Bhaktivedanta Swami if he would read Śrīmad-Bhāgavatam to her in the evening. He agreed. She began sending her car for him at six o’clock each evening, and they would sit in her garden, where he would recite and comment on the Bhāgavatam.

Mrs. Morarji: He used to come in the evening and sing the verses in rhythmic tunes, as is usually done with the Bhāgavatam. And certain points-when you sit and discuss, you raise so many points-he was commenting on certain points, but it was all from the Bhāgavatam. So he used to sit and explain to me and then go. He could give time, and I could hear him. That was for about ten or fifteen days.

His backing by Scindia and his sponsorship in the U.S. were a strong presentation, and with the help of the people at Scindia he obtained his visa on July 28, 1965. But the P-form proceedings went slowly and even threatened to be a last, insurmountable obstacle. 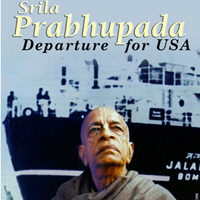 Śrīla Prabhupāda: Formerly there was no restriction for going outside. But for a sannyāsī like me, I had so much difficulty obtaining the government permission to go out. I had applied for the P-form sanction, but no sanction was coming. Then I went to the State Bank of India. The officer was Mr. Martarchari. He told me, “Swamiji, you are sponsored by a private man. So we cannot accept. If you were invited by some institution, then we could consider. But you are invited by a private man for one month. And after one month, if you are in difficulty, there will be so many obstacles.” But I had already prepared everything to go. So I said, “What have you done?” He said, “I have decided not to sanction your P-form.” I said, “No, no, don’t do this. You better send me to your superior. It should not be like that.”

So he took my request, and he sent the file to the chief official of foreign exchange-something like that. So he was the supreme man in the State Bank of India. I went to see him. I asked his secretary, “Do you have such-and-such a file. You kindly put it to Mr. Rao. I want to see him.” So the secretary agreed, and he put the file, and he put my name down to see him. I was waiting. So Mr. Rao came personally. He said, “Swamiji, I passed your case. Don’t worry.”