I recently met an elderly mataji who excitedly shared how these days she is meditating on ‘om’ during her yoga sessions. When I asked her is it helping her, she replied that it is supposed to help her but nothing has happened yet.

`beta, bhagawan to bahut duur hai, shanti mil jaye toh bahut hai’ (Son, God is very far, if I just get peace it is good enough for me!)

Few months ago I happen to meet mataji’s neighbour who, a little more openly, admitted that she has tried so many camps by various so-called spiritual organisations but peace seems to elude her, in fact she is becoming less peaceful by the passage of time! I asked her what was her experience during those meditation programs. She admitted that every single time she found it impossible to focus on ‘shunya’ (nothing) and her minds remained filled with all sorts of thoughts.

These days it has become very fashionable for new age gurus to focus and ‘teach’ general masses about peace. They employ various methods like meditation on formless god, meditate on ‘shunya’ (nothingness), try to see and meditate on ‘OM’ between the eye brows to imagining that we are sitting near a seashore, waves are coming, birds are flying…..we are a spirit soul and all is peaceful!

But we know from our own past experience that when we  attend these so called ‘meditation camps’, or sessions, the relief, if any, is temporary at best. Once out of the such sessions, one is back to the square one, the placebo effects rubs off fast.

What does it show ?

1. People, in general, are NOT peaceful.

2. The trend of people not being peaceful is increasing.

What is the problem ?

kvacic ca śīta-vātādy-anekādhidaivika-bhautikātmīyānāṁ daśānāṁ pratinivāraṇe ’kalpo duranta-cintayā viṣaṇṇa āste.
Translation:
Being unable to protect himself from the threefold miseries of material existence, the conditioned soul becomes very morose and lives a life of lamentation. These threefold miseries are miseries suffered by mental calamity at the hands of the demigods [such as freezing wind and scorching heat], miseries offered by other living entities, and miseries arising from the mind and body themselves.
Srila Prabhupada emphasises in his purport that ‘The so-called happy materialistic person is constantly having to endure the threefold miseries of life, called adhidaivika, adhyātmika and adhibhautika. Actually no one can counteract these threefold miseries. All three may assail one at one time, or one misery may be absent and the other present. Thus the living entity is full of anxiety, fearing misery from one side or the other. The conditioned soul must be disturbed by at least one of these three miseries. There is no escape.’
Let us also see why do we chant Om, shanti, shanti, shanti at the end of so many puja and prayers and why does the word ‘shanti’ is repeated thrice. The word shanti is repeated thrice because we are all disturbed by these three kinds of miseries :

1. Adhyatmika : miseries inflicted by the body and mind itself, examples are fever, stress etc.

So we repeat ‘shanti’ three times to get relief from each of the above three types of miseries.

There is no mention of God in most of such discourses/solutions offered by these new age philosophers, gurus, etc. God, Krishna, is completely missing as each of the so-called guru tries to play or become God and/or they focus and impress upon the gullible people that they hold the power to bring peace in their lives, not God or His names or that the power lies in each one of us, anything but God.

What is the right way to get peace ?

One who is not connected with the Supreme [in Kṛṣṇa consciousness] can have neither transcendental intelligence nor a steady mind, without which there is no possibility of peace. And how can there be any happiness without peace?

Unless one is in Kṛṣṇa consciousness, there is no possibility of peace. So it is confirmed in the Fifth Chapter (5.29) that when one understands that Kṛṣṇa is the only enjoyer of all the good results of sacrifice and penance, that He is the proprietor of all universal manifestations, and that He is the real friend of all living entities, then only can one have real peace. Therefore, if one is not in Kṛṣṇa consciousness, there cannot be a final goal for the mind. Disturbance is due to want of an ultimate goal, and when one is certain that Kṛṣṇa is the enjoyer, proprietor and friend of everyone and everything, then one can, with a steady mind, bring about peace. Therefore, one who is engaged without a relationship with Kṛṣṇa is certainly always in distress and is without peace, however much he may make a show of peace and spiritual advancement in life. Kṛṣṇa consciousness is a self-manifested peaceful condition which can be achieved only in relationship with Kṛṣṇa.

O Father, O Lord, O Personality of Godhead, the living entities in the material world can never have any happiness because they are overwhelmed by the three kinds of miseries. Therefore they take shelter of the shade of Your lotus feet, which are full of knowledge, and we also thus take shelter of them.

But then should only peace be the goal of a human life ?

In a conversation (London,1973) with a buddhist monk, Srila Prabhupada spoke:

Buddhist Monk (1): What we believe is that incomparable bliss and peace everlasting is the most perfect.

“I am the proprietor of all the lokas,” sarva-loka-mahesvaram, suhrdam sarva-bhutanam. “I am the friend of everyone.” Bhoktaram yajna-tapasam. “And I am the enjoyer of all fruitive activities.” Jnatva mam. “When one knows Me like that, he gets santi.”
This is the santi formula given by Krsna. One has to accept Krsna as the Supreme Enjoyer. Because He’s the proprietor of everything; therefore He should be enjoyer. And because everything belongs to Him — we also belong to Him — so suhrdam sarva-bhutanam, He’s friend of everyone. So these three things, if you understand-Krsna, or God, is the supreme enjoyer. He is the supreme proprietor, and He is the supreme friend of everyone — then you get santi. If we understand these three things only, then there is santi. Otherwise there is no possibility of santi. 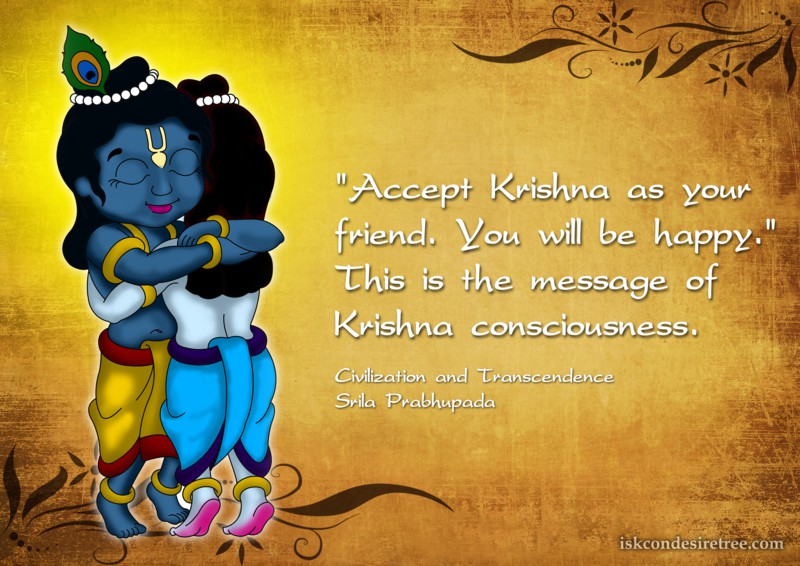 In the `journey of self-discovery’, Srila Prabhupada concludes that

So, you should try to love Krishna, and you will see how much you are satisfied. There is no other way to become fully satisfied. Earning great amounts of money will never give you satisfaction. …….So my humble request to you all is that you try to understand this sublime benediction of life, Krishna consciousness. Simply by chanting Hare Krishna you will gradually develop a transcendental loving attitude for Krishna, and as soon as you begin to love Krishna, all your troubles will be eradicated and you will feel complete satisfaction.

Did it ever happened en masse?

The elderly mataji I mentioned in the beginning is happily reading Ramayana these days. She had some attraction for Lord Rama and I was somehow able to convince her to start reading Ramayana in the Purushottam month. She has also promised to read ISKCON Bhagavad Gita once Ramayana is over.

So we discovered that we can not become peaceful without taking shelter of the lotus feet of Krishna and that peace in itself  is just a byproduct in the process of Krishna consciousness and it should not be the goal of our life.