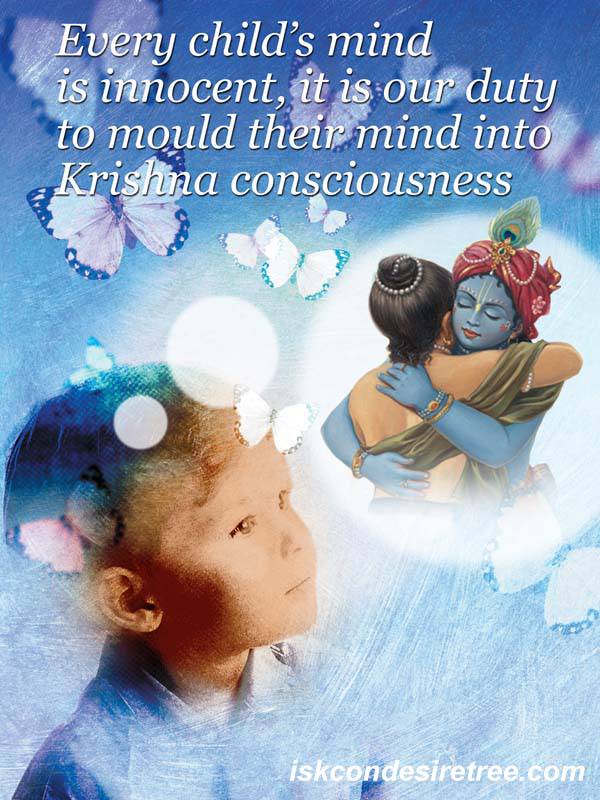 I regularly hear parents complaining that their children don’t listen to them or they do not have basic etiquette while talking to parents or siblings, everything is about their own self.

During a recent house program a Mataji marveled at the 8 year son of a devotee couple, how effortlessly he sat through the whole  1.5 hours program and completed his homework without any protest. Mataji recollected that before coming to this program she yelled at her 15 year old daughter to study for her class test next day. She was exasperated just narrating it. Being the father of a teenage girl my own self, I could relate to her frustration.

Few months back a worried father called up to seek help as his son seems to be trading illegal substances in his first year at college.

Another father shared how his son is ‘printing’ currency notes on his home printer and trading it just for ‘kicks’.

Are we willing to change for our children’s sake ?

The real surprise is that when I ask the parent if they would be willing to change for the sake of their children, they think of my changed lifestyle,  and the generally the answer is a polite N0!

The problem is that we, as parents, are ourselves so busy in so-called `enjoying my life’ that we are also guilty in neglecting our duty of raising our kids properly. In many cases the material life has become so busy, with both parents working hard, children are bound to get neglected. Of course, today the whole atmosphere is polluted with exposure from TV, mobile and now the final nail has been stuck by internet. Most of the digital games to promote hatred and violence in our young children. But all this should mean more care and protection and not less.

In my little experience I have found that where both the parents are devotees, children usually come up nicely as both role models are similar. Issues crop up where only one of them, mother or father, is practicing  Krishna consciousness. At times children become confused but generally stay grounded and pick up some or many good habits depending upon many factors. Since kids spend most  time with Matajis, it becomes more challenging if mothers are not devotees. Any devotee must spend a lot of time with his kids. Sometimes the devotees get so busy in their own sadhana that they forget about sharing love and preach to their own kids, may be because of resistance from the other half. For example: a father must listen and play with kids and in some plays introduce Krishna consciousness. We have to make an effort to change their thinking, their thought process and make them ready to face both material world and progress in spiritual world. But the big problem is where both parents have no idea about spirituality, it is a big gamble for them in today’s environment.

Many times we forget that our children imitate and absorb more from our own behaviour. They carefully observe how their parents behave with each other, with them and with the outside world. We cannot teach them to be polite and then fight like cats and dogs in front of them. They will not ‘hear’ us if we don’t ‘hear’ them. I am also learning all this the hard way.

I spoke to Shyamsundar Prabhu and sought his views as Prabhuji was himself raised in a Krishna consciousness family and now he is a proud father of two very well raised kids. Prabhuji stated:  We need to comprehend our kids’ strengths and weakness. The parents must see whether to plug weakness of your child so that it doesn’t become impediment in the path of their spiritual progress or harness their strength so that they become more fixed in bhakti and weaknesses get effaced over a period of time. For example: my son was very good in reading but had low attention span. I gave him KC books and made the glories of Krishna so interesting for him that his concentration span increased by leaps and bound. I focused on his weakness of concentration: read Krishna book to him; exchanged kathas and learning from each kathas. On the other hand my daughter had interest in music and food but totally disinterested in philosophy discussion. So all I did was to use her strength in music and recognition by others to motivate her. She is now learning the importance of humility that she has to sing for the pleasure of the Lord and devotees and not for her own recognition.

Prabhuji also stressed that we should never loose hope that your kids won’t come in Krishna Consciousness. Keep trying. But do not push too hard that chord breaks. It should be subtle and slowly if there is resistance. Patience pays. For kids to respect, the kids must look up to us and have higher standards so that they have something to achieve as benchmark. Both, parents and kids, should be able to push each other to have mutual respect and love for each other.

Srila Prabhupada wrote many letters to his disciples on raising the kids and I am sharing some.

What is the aim of married life ?

The aim of married life is to produce nice children, Kṛṣṇa conscious children. That is the best service to the human society: produce nice children. Don’t produce cats and dogs. That is my request. Otherwise don’t produce. Remain separate. Separate means there is no separation, but don’t produce children. That is my request. Putrārthe… Pitā na sa syāj jananī sā syāt. The Bhāgavata says, “One should not become a father, one should not become a mother, unless they are able to protect the children from the imminent danger of death.” What is that? The cycle of birth and death. If you can train your children to Kṛṣṇa consciousness, then your child will go back to Godhead in this life. That should be the aim. As you will try to go back to Godhead in this life, similarly, you shall take charge of your children that he can also go in this life back to Godhead. The mother’s and father’s duty should be that “This child is born out of my womb, and this is the last phase of his life, to come into this womb of any animal or man—no more material body.” That should be the responsibility of father and mother. That is the direction of Bhāgavata. (Paramananda & Satyabhama’s Wedding — Montreal, July 22, 1968: )

Who should beget children ?

If you and your wife want to have children for raising them in Krishna Consciousness, and if you are prepared to take the full responsibility for delivering them from the clutches of birth and death, then I have no objection. (Letter to Sri Govinda — Jaipur 20 January, 1972)

How to raise them ?

The basic idea of raising children as they are described in the Vedic literature is that from birth till the age of five years the parents may be very lenient with the child. From the ages six to ten they should tighten the discipline of their child, and from the ages of ten till the sixteenth year the parents should be as strict as a tiger with their child so that he will be afraid to be disobedient at all. Then after the sixteenth year the parents shall treat their child as a friend, and the child is allowed to gradually develop his adult responsibility and independence. (Letter to Vibhavati – Los Angeles 15 July, 1969) Don’t neglect them for any cause.

Please accept my blessings. I am in due receipt of your letter dated July 19, 1972,….. For you, child-worship is more important than deity-worship. If you cannot spend time with him, then stop the duties of pujari. At least you must take good care of your son until he is four years old… These children are given to us by Krishna, they are Vaisnavas and we must be very careful to protect them. These are not ordinary children, they are Vaikuntha children, and we are very fortunate we can give them chance to advance further in Krishna Consciousness. That is very great responsibility, do not neglect it or be confused. Your duty is very clear. (Letter to Arundhati — Amsterdam 30 July, 1972)

Can they be trained ?

Pradyumna: “Children who appear in such families fortunately generally imitate such worship of the Deities, even in the way…”

Prabhupāda: Children’s nature is to imitate, because they have to learn. So nature has given them the propensity to imitate. So the first imitation begins from the parents. So if the parent is nice Kṛṣṇa devotee, naturally the children become devotees. That is the opportunity of taking birth in a Vaiṣṇava family. So you are all Vaiṣṇavas. If your children do not become Vaiṣṇava in the future, then it is a great, I meant to say, fault on your part. So you should be very cautious, careful, that children are not going astray, they are becoming actually Kṛṣṇa conscious. That means you have to imitate, er, you have to be devotee, and they will imitate. By imitation, imitation, imitation, they will come to Kṛṣṇa consciousness. Then they will never give it up. (Lecture on SB 2.3.15 — Los Angeles, June 1, 1972)

I want hundreds of children !

Regarding the child problem: I may inform you that all our children born of the Krishna conscious parents, they are welcome and I want hundreds of children like that. Because in future we expect to change the face of the whole world, because child is the father of man. Anyway, I have seen Malati is nursing her child so nicely that she attended my meeting every day and the child was playing and she never cried. Similarly, Lilavati’s child also never cries or disturbs the meeting. Lilavati was always present with her child, so it depends on the mother. How to keep the child comfortable, so that it will not cry. The child cries only when it feels uncomfortable. The child’s comfort and discomfort depends on the mother’s attention. (Letter to Krsna Devi — Montreal 21 August, 1968)

So we see that being a parent come with lots of responsibility and that should not mean just pushing Krishna consciousness down their throat or giving up when we face resistance. Specially in a family atmosphere one has lead with more effort and humility. We should see ourselves more as a caretaker whom Krishna has handed over these special souls for some time. Even when we face resistance we should continue our efforts with lot of affection and productive time, they will bear result. We should see such circumstances as Krishna’s special mercy on us that He has given us some challenging situation which is good for our own spiritual progress, on job training! All this may involve praying and then striving to inculcate more compassion, humility, intelligence, affection, a softer heart, patience, faith in Krishna and much more but don’t we all hanker to have these very qualities as a devotee!